The Beginnings of Bluestone

The origin of what we have come to know and appreciate as the Bluestone Conference Center (now referred to as Bluestone Camp & Retreat) is found in the report of the Bluestone Dam Camp Committee, dated October 6, 1949, appointed by the Synod of West Virginia.  The report was delivered to the Synod in a called meeting at the Hinton Presbyterian Church.

Included in the report were the recommendations to “lease the site known as LOW GAP or BERTHA, comprising approximately 300 acres with ample level ground, or gently rolling land.  There is a gentle rise in the back which would present no building problems.  The permanent buildings could be placed on this rise, approximately one quarter mile from the shore and above the flooding elevation.  This site presents an easy access from the hard surfaced road at Forest Hill, the road being in length approximately seven miles and partly graveled,” and “to appoint a committee to study and work out all the details of the case”  The report stated “time is of the essence.  Many requests for locations in this area are currently being received by the Corp of Engineers, and desirable recreational areas are getting more scarce.  The committee feels that the details can be studied and worked out after the lease is granted and in our hands.”  The Synod approved both recommendations.

The Vision becomes a Mission

By 1953, a Master Plan was ready for presentation.  Initial construction was planned to accommodate 200 campers with 400 as an ultimate goal.  Four or five cabins, a unit lodge, and a Conference Center including a dining hall for 400 and a completely equipped kitchen were recommended in the master plan.

In 1954, an 8 inch well had been drilled, construction on a power line had been started, the State Road Commission had agreed to grade the access road through the Conference Center grounds and the ground for the location of the the Dining Hall, the Caretakers Lodge, and the first unit had been cleared.

During the 1955 season, 457 people representing 22 different groups enjoyed the comfortable housing and adequate dining facilities.  An adequate water system with hot and cold water in each cabin and lodge, showers and the best toilet facilities available was completed.  A beautiful caretaker’s lodge and a fully equipped workshop, complete electric service for light and power, and natural gas for heating, cooking, etc. was piped to every building.  The second unit of cabins was under construction.  The building of a swimming pool was planned.  Churches were encouraged to adopt special projects such as the building of cabins at $3,500 each or unit lodges at $10,000 each over and above the $2.00 per member goal.

The 1957 minutes of the Synod state that because of increased building costs, $28,000 more than had been received had been spent.  The expectation was that extra financial gifts would be given in 1958 to provide for the completion of the current projects and the liquidation of all obligations.

The 1958 season opened officially on April 16 and closed on November 16.  During that period 45 different groups numbering 1,987 persons came to the conference center for camps, conferences, retreats, committee meetings and other types of Christian gatherings.  Also in 1958, because of problems with the water system, Bluestone’s Board of Directors made the decision to build a new water system using Bluestone Lake as the source with proper filtration and purifying systems in enclosed steel tanks.  The tanks were donated by the Thornburg Machinery Company of Huntington, WV.

In 1959, there were 54 groups totaling 2,747 persons who made use of Bluestone.  The 1960 season opened on March 21 for a training retreat on Evangelism.  The Conference Center proved itself to be a worthy all-weather and all-season retreat location since there was 14 inches of snow on the ground at the time of the evangelism retreat.  Bluestone was in much demand and few open dates were on the calendar during that year.

A thorough study of the future operations, relationships, program of construction and method of financing was assigned to a committee whose report is found in the 1960 minutes of the synod.  Resident camping, conferences, workshops, retreats, leadership training events, rallies, picnics and church courts were identified as carrying out the purpose of the Bluestone Conference Center.

In 1961, at the 7th annual meeting of the Bluestone Members and Board of Directors, it was reported that “$332,000 had been pledged in the Bluestone Conference Center – Davis-Stuart Capital Funds Campaign, the Center’s share of that amount being approximately $155,000.”

The outdoor camping area is what we know today as the Hogan Area.  The two proposed unit lodges would have been identical to the Greenbrier Lodge, but were never constructed. The Health Lodge was built instead.  The Executive Director’s Residence was never built, but the original home built as the caretaker’s lodge remains.  The last of Bluestone’s “original construction” was completed in 1966.  There would be no other facility additions until after the turn of the new century.

In the mid 1990’s, Bluestone received a disbursement through the Presbytery of West Virginia’s participation in the PCUSA Bicentennial Fund Drive.  This money, along with additional grant moneys received, was invested with the Presbyterian Foundation.  Bluestone had over $40,000 in the Foundation at one time, but major maintenance and repair expenses depleted these investments by the end of 2003.

In 1997, the Presbytery of West Virginia authorized a special offering for Bluestone to help pay for the necessary replacement of Bluestone’s utility gas and water line systems.  Churches and individuals throughout the presbytery contributed just over $21,000 toward the expense.

From 2001 – 2005 the first new facilities in 35 years were built, made possible largely through Presbytery Mission Development Loans, and also thanks to the generosity of select presbytery churches who supported the construction efforts with additional funding and volunteer support.  They are an addition & renovation of the Caretaker’s Lodge, three Pavilion Shelters, a Climbing/Bouldering Wall, four platform bases (for eventual cabin construction), an Amphitheater and two Showerhouses.

In response to the minority report, a small group of five people got together and formed a West Virgina Non-Profit 501(c)3 corporation called Friends of Bluestone, Inc.  They became the first board of directors, and began the task of managing an annual fund campaign that was to be guided by a two year covenant agreement with the Presbytery.

Friends of Bluestone, Inc. successfully achieved the fundraising goals that were negotiated in the terms of their covenant with the Presbytery of West Virginia, and as a result, the Covenant was amended and renewed for a second time in December of 2012.  The current version will remain in place through 2020.

Thanks to the generosity of donors, Friends of Bluestone, Inc. has been able to provide an average of $40,000 in annual support. A Basic Cabin Remodeling Plan has been established, and we continue to work each year toward building a better Bluestone for the future.

Rather send us a check? Please mail to: 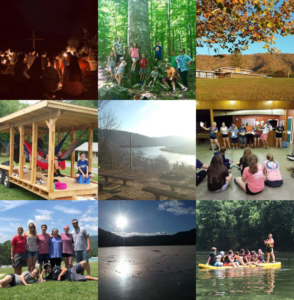